An effective and powerful independent international commission against corruption benefits from and strengthens fiscal transparency. The case of Guatemala. 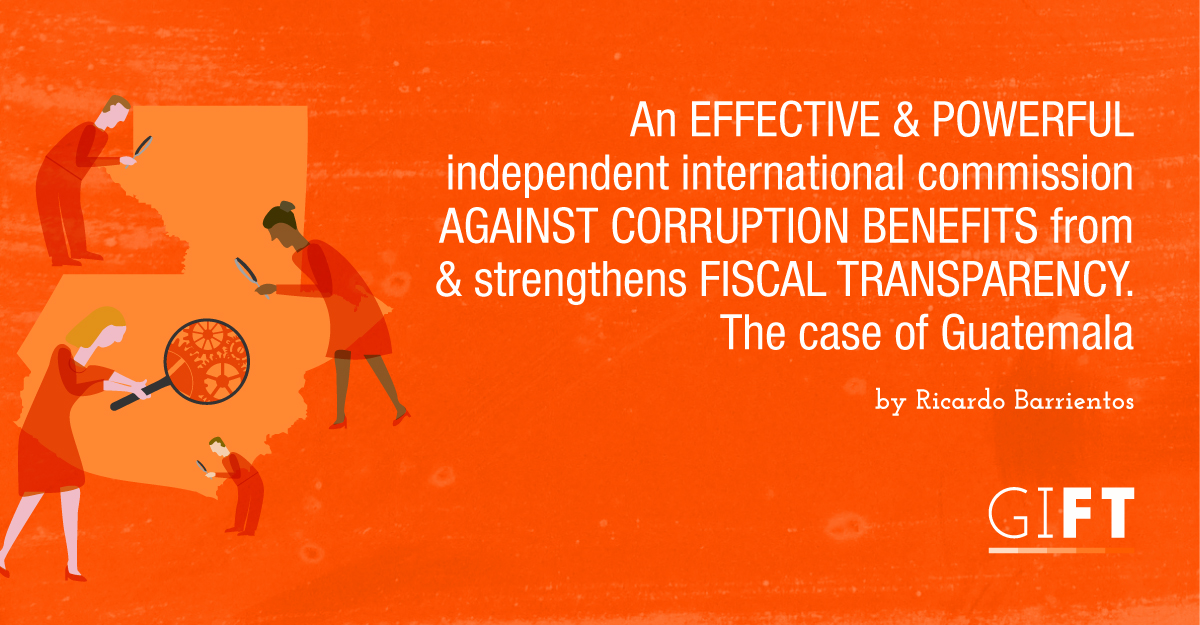 The relationship between political power and fiscal transparency has always been there, or at least, has been an issue for theoretic or academic debate. But since 2015, Guatemala offered a very concrete case which showed this relationship, perhaps in a dramatic way.

The whole world heard how Guatemalans exercised citizenship in an exemplary and pacific way, by gathering massively in Central Square protesting against corruption and demanding the resignation of Vice President Roxana Baldetti and President Otto Pérez Molina. Today both of them, plus hundreds of Government officials, congressmen, Supreme Court members, mayors, judges, businessmen and individuals, face trial for corruption charges. By any standard, this is no small story, not to say for Guatemala, a country better known for rampant impunity, violence (suffered a 36 year civil war), poverty and deprived living conditions for most of its population.

And what is more meaningful is that a whole citizen movement started with a corruption scandal in the tax administration, when a criminal structure called The Line  was discovered within it, dedicated to tax and customs fraud. The scale of the citizen reaction is easily explained and understood if one takes in account that the tax administration is a State entity empowered to force citizens to comply with their tax obligations, and to sanction them severely otherwise. In any social contract, and fiscal transparency principle in particular, these powers must have as a proportional counterpart a fully honest and transparent institution, in order to achieve legitimacy and credibility to the eyes of taxpayers.

So, the Guatemalan tax administration failed outrageously to this basic social contract, and as a result, almost a whole Government was forced to resign and face trial. For the Guatemalan incipient, and many times dysfunctional democracy, it was highly encouraging that it didn’t matter if among those involved in the scandal were powerful people like the President, the Vice-President, the Superintendent of Tax Administration, businessmen and many others. The fact that a serious political crisis triggered by a corruption scandal was managed in a peacefully and democratic way sparked hope in the whole society.

But this fascinating story would not have been possible without the very active intervention of an independent and powerful international entity operating in the country: the International Commission Against Impunity in Guatemala (Cicig), created by an agreement between the Guatemalan Government and the United Nations. Thanks to the powers in its mandate, including freedom to conduct investigations, make accusations and others, in April 2015 Cicig and the Public Prosecutor Office (Ministerio PÃºblico, MP) made the first arrests linked to The Line  case, including the Superintendent of Tax Administration in office, a former one, businessmen, and a dozen of public servants, some directly linked to the Vice-President.

The investigations and arrests made by Cicig and MP not only triggered the citizen movement, but also demonstrated how a criminal structure takes great advantage of fiscal transparency flaws. But perhaps far more important, it demonstrated that only a truly independent and powerful entity can challenge the political powers in the State branches. In the Guatemalan case, it was achieved by an UN special entity with strong and massive citizen support. Just think in how many countries the public prosecutor office is powerful enough to investigate, and, arrest or indict the President, members of the Parliament or the Judiciary, when evidence of corruption is found? The Guatemalan is an example of a successful case.

The Line  would not be the only, but just the first of many cases of corruption prosecuted by Cicig-MP. Other relevant Cicig-MP cases like State Cooptation  are on trial, where people is accused of violating transparency norms for public procurement (specially purchase of medicines and other public health services supplies), civil service, tax credit reimbursements, public investment contracts, political campaign financing, etc.

Perhaps the most important lesson from the Guatemalan case is that fighting corruption and achieving the highest standards of fiscal transparency is a question of changing the balances of political power. This is because people who manage to be corrupt with impunity are powerful, and in most cases is enjoying the party of their lives: they are not willing to surrender that share of power and will defend fiercely their privileges. Stopping them requires a counterbalance, a new actor that changes the status quo in the power distribution.

In environments where corruption is seriously widespread, impunity quickly becomes one of the most lucrative businesses: an illicit market where the possibility to break the law without punishment is appetizing merchandise. The Guatemalan case demonstrated that this merchandise gives enormous shares of power to the seller, empowering them both financially and politically. Before 2015 Guatemala achieved significant improvements to its fiscal transparency legislation, but the impunity masters were powerful enough to assure to break the improved tax code, laws for public information access, public procurement, probity and budget, with no consequences. Former President Pérez Molina and Vice-President Roxana Baldetti, several officials of their administration, businessmen, congressmen and many others, bought that merchandise, precisely, confident of the status quo.

What Cicig really means for Guatemala is a real counterbalance, which achieved the capture of a significant share of political power to break that status quo. How was this possible? What Cicig-MP did was just apply the existing legislation, made some arrests and gave a press conference explaining it. So simple and clear that citizens fully understood, and perhaps more important, believe that stopping impunity was possible in Guatemala, generating an unprecedented massive citizen support for Cicig-MP. And massive support is a share of political power capable to counterbalance the muscle of a corrupt administration.

This success in Guatemala is also linked with a carefully designed strategy by Cicig: of the overwhelming number of corruption cases, they decided to start with the tax administration. After that, then they followed cases in the social security institute, political parties, Congress, municipalities, Judiciary and in almost all State institutions. That decision hit right in the heart of taxpayers, who understood and felt that the social contract has been broken, and it is possible to demand reparation.

In the ongoing trials, strong fiscal transparency legislation is demonstrating its value, because the accusations are based in violations of those preexistent norms. The huge difference is that before Cicig, impunity reigned, where even good fiscal transparency legal reforms were violated without consequences. Now Cicig-MP demonstrated that it is possible to prosecute it.

Of course, this framework of an international entity counterbalancing the Government formal powers is controversial, and has sparked bitter debates from the perspectives of sovereignty and bad memories of past foreign interventions in Central America. For example, Honduras is essaying its version of an international independent entity, but weaker than Cicig. El Salvador has rejected it, trusting fully in its public prosecutor office. Results are to be seen in those two Central American countries.

But, in Guatemala undoubtedly it has worked.