How are the GIFT Principles on Public Participation in Fiscal Policy being incorporated in international fiscal openness instruments? 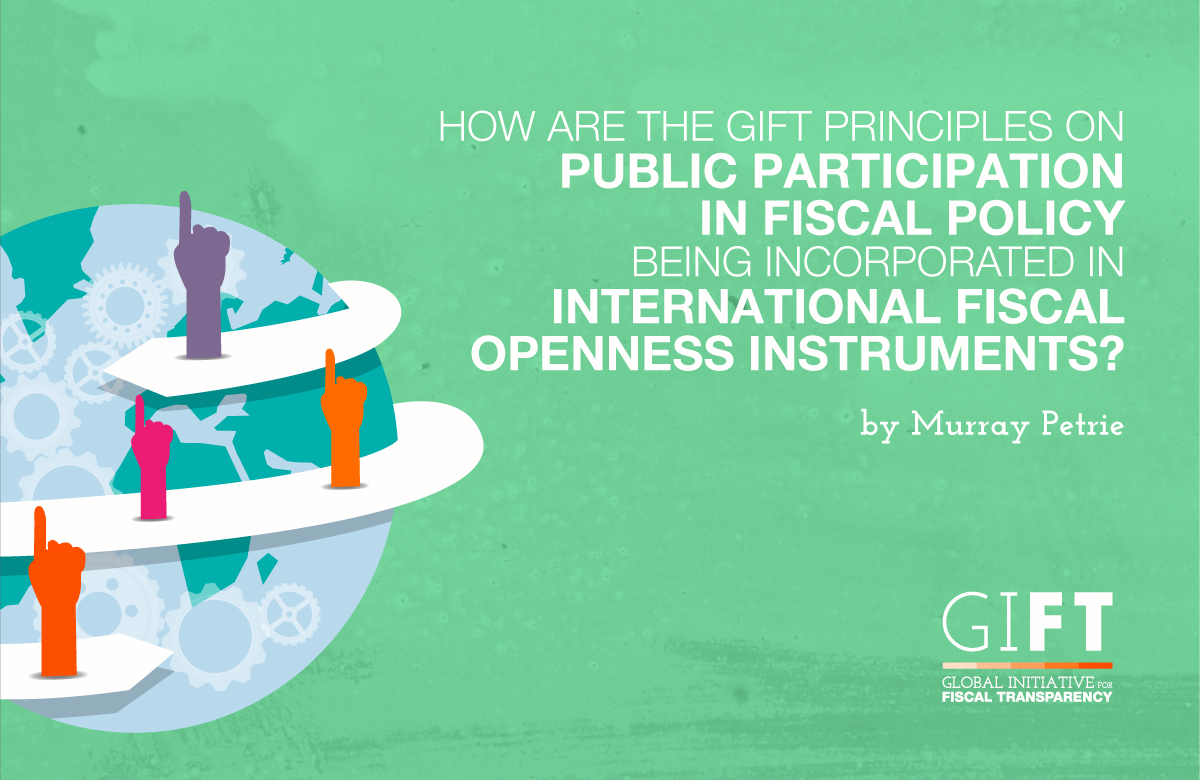 Principle 10 of the GIFT High Level Principles on Fiscal Transparency asserts that citizens have a right to participate directly in fiscal policy design and implementation. GIFT has subsequently developed a set of Principles of Public Participation in Fiscal Policy.  The Principles have directly influenced the design of international instruments such as the Open Budget Survey, and are becoming recognized as an emerging norm on how governments should manage the public finances. Since 2014 GIFT has been working pro-actively through the OGP-Fiscal Openness Working Group to support the implementation of more ambitious commitments on open budgeting in Open Government Partnership Action Plans. The OGP and GIFT are partnering in release of a Guide on Principles and Mechanisms on Public Participation in Fiscal Policy at the Paris OGP Summit in December.

Principle Ten of the GIFT High Level Principles on Fiscal Transparency, Participation, and Accountability establishes that: ˜Citizens and non-state actors should have the right and effective opportunities to participate directly in public debate and discussion over the design and implementation of fiscal policies.’ [i] The basic idea is that fiscal transparency reaches its broader potential when people use fiscal information and get involved in decisions on the use of public resources.

What is public participation? It refers to the variety of ways in which the public “ including citizens, civil society organizations, business organizations, academics, and other non-state actors “ interact directly with public authorities on policy design and implementation. Participation may be through face to face communication, deliberation or input to decision-making, or by written forms of communication including the internet. Participation ranges from one-off consultation to on-going and institutionalized relationships, such as regular public surveys, administrative review mechanisms, standing advisory bodies, or citizen representation on governing bodies.

Open and inclusive public participation processes stand in contrast to private negotiations or dealings of public officials. Open processes can give greater voice in a more transparent manner to a broader range of individual members of the public and civil society organizations that have a stake in, are affected by, or are intended to benefit from fiscal policies.

Public participation in fiscal policy, as defined by GIFT, covers participation across the whole annual budget cycle; in new policy initiatives or reviews (e.g. on revenues or expenditures) that extend over a longer period than the window for preparation of the annual budget; in the design, production and delivery of public goods and services; and in the planning, appraisal, implementation and review of public investment projects.

The potential of public participation has of course been hugely boosted by the ICT revolution that has dramatically lowered the cost of direct interaction between citizens and governments while also creating entirely new spaces for citizen input and deliberation.

Why is public participation in budgeting being described as ˜the next frontier in fiscal transparency’?

The first generation of international fiscal transparency reforms focused on the need for comprehensive information in budgets, forecasts and outturn reports. Experience has shown, however, that disclosure is a necessary but not a sufficient condition for accountability. Attention is now increasingly moving to translating public disclosure into more effective accountability by means of greater public engagement on fiscal management. ˜Public information and participation are mutually reinforcing. Access to adequate, timely, useful information is essential to informed, effective public participation. At the same time, opportunities for participation create the incentives for the public to request and utilize available information.’[ii]  And although public participation in budgeting is relatively new, the evidence attesting to its impact on resource allocation and service delivery, and development outcomes, is growing.

In recognition of the above, two major international institutions have endorsed the importance of public participation in budgeting as a complement to greater transparency. The International Monetary Fund’s revised Fiscal Transparency Code, published in 2014, includes the principle of direct public engagement in budget deliberations policy (principle 2.3.3). And the OECD’s Recommendation on Principles on Budgetary Governance, which forms part of the international law for member countries, stipulates that debate on budgetary choices should be inclusive, participative and realistic: ˜Parliament and citizens should be able to engage with and influence the discussion about budgetary policy options, according to their democratic mandate, competencies and perspectives’ (Principle 5).

What are the GIFT Principles of Public Participation in Fiscal Policy?

The Participation Principles have been workshopped since 2012, and have been the subject of public consultation.[iii] There are ten inter-dependent principles: public participation in fiscal policy should be accessible; open; inclusive; respectful of self-expression; timely; informative; proportional; sustainable; complementary; and reciprocal. Further explanation of the principles can be found at www.fiscaltransparency.net/ParticipationPrinciples_GIFT_30Mar2016_ENG.docx

How have GIFT’s participation principles influenced international instruments and actions?

The International Budget Partnership’s (IBP) Open Budget Survey (OBS) lead the way when it introduced a section on public participation across the budget cycle in the 2012 Survey. This was the first cross-country instrument to measure levels of public participation in budgeting. Following the development of the draft GIFT participation principles, the IBP (a lead steward of GIFT) fundamentally re-designed Section 5 of the survey, on Public Engagement in the Budget Process, to fully incorporate the GIFT principles.

Researchers began collecting data for the 2017 Survey in September, and will assess events, activities, and developments that occur before 31 December 2016. The 2017 survey and future surveys will therefore measure the extent to which country practices reflect the GIFT Participation Principles.

What are some of the further channels through which the GIFT Participation Principles are gaining traction?

A key area of focus for GIFT is the Open Government Partnership. GIFT and the OGP established the Fiscal Openness Working Group in 2013 to provide a venue for ministries of finance, CSOs and others to deliberate, share experiences, and expand fiscal transparency and public participation in fiscal policy in individual countries and regions.[vi]

To that end, GIFT and the OGP are partnering to release a Guide on Principles and Mechanisms of Public Participation in Fiscal Policy at the OGP Summit in Paris from 7-9 December. The Guide will provide detailed information on country practices that illustrate the participation principles across different dimensions of fiscal policy. The Guide is intended for use by ministries of finance and line ministries, legislatures, Supreme Audit Institutions, and citizens, CSOs, private sector entities, research institutes and academics that are seeking to initiate or to engage in public deliberation.

In addition, the OECD, together with GIFT and leading international institutions, is developing a Budget Transparency Toolkit for the G20 Anti-Corruption Working Group. The Toolkit is intended to serve as a gateway to the range of recognized international standards and norms on budget transparency and participation. Reflecting GIFT High Level Principle 10, the framework for the Toolkit contains a section on ˜Openness and civic engagement,’ and the GIFT Public Participation Principles are cited in support of three of the good practices in the draft.

There are two further mechanisms through which the GIFT Participation Principles seem likely to generate impetus for increased public engagement in fiscal policy. The first is through a supplementary module that GIFT has designed for a PEFA (Public Expenditure and Financial Accountability) assessment.[vii] The module utilizes the PEFA approach to performance measurement to facilitate assessment during a PEFA mission and the integration of the results into a PEFA Performance Report as appropriate.  It comprises one indicator covering four discrete dimensions of public participation in fiscal policy covering both the legal framework for participation and actual levels of participation:

i. Public participation across the annual budget cycle.

ii. Public participation in the design and delivery of public services.

iii. Public participation in the appraisal and implementation of public investment projects.

The participation module is being piloted in the PEFA assessment of the Philippines.[viii]

Finally, the same indicator has been piloted by Global Integrity in a civil society assessment of public participation in fiscal policy in South Africa. Gary Pienaar, the Global Integrity in-country researcher, triangulated evidence by conducting desk research and interviews with government officials, civil society representatives, and academics. The study was peer reviewed by a National Treasury official. It provides an interesting illustration of the potential for detailed civil society monitoring and assessment in this emerging field, to complement the OBS.

Taken together, these developments represent the fairly rapid dissemination of a new international norm on how governments and other state entities should engage the public in the design and implementation of fiscal policies. GIFT will deepen this work through extending the Guide on Public Participation, and gathering more evidence of country practices and what works. In particular, GIFT’s work program will focus on connecting these initiatives more closely to the lives of ordinary citizens, by opening up the links between national budgets and the local delivery of public services, and by increasing the effectiveness of fiscal transparency in countering corruption.