Measuring and visualizing the budget transparency of Croatian local governments

Budget transparency (BT) means that citizens can obtain complete, accurate, timely and understandable information about the budget. It allows the general public to get informed on and influence decisions about the collection and spending of public money and, consequently, to contribute to more efficient collection of money and the supply of public goods and services, thus increasing the accountability of local authorities and limiting opportunities for corruption. This is an important issue for Croatia, given the potential benefits from BT and, particularly, the severe fiscal crisis with which the country is currently faced.

For last few years the Institute of Public Finance (IPF) has been analyzing the BT of Croatian counties, cities and municipalities (i.e. its local government units “ LGUs) and publishing the results in the IPF Newsletters. The newest results are available at Budget transparency of Croatian counties, cities and municipalities. This year IPF went a step further and for the most recent results produced maps showing the levels of local BT measured by the number of key local budget documents published on the official websites of all LGUs (click on the map below). 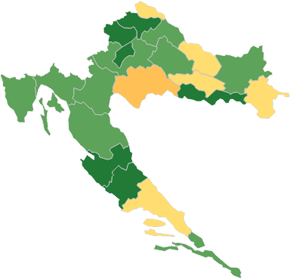 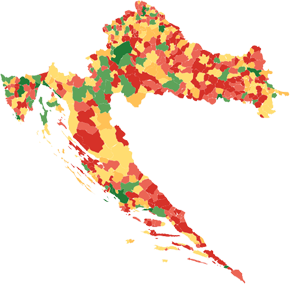 As it is not always easy to determine whether a budget document is published on the official websites of LGUs, the level of BT was measured according to the following criteria:

Between 13 November and 20 December, the publication of the 2013 year-end and 2014 mid-year reports was examined and the publication of the budget proposal, enacted budget and citizens budget for 2015 from 2 February to 31 March 2015. Documents published subsequently are deemed not to have been published. The observed periods for LGUs have already been generous, as the websites were assessed well after the dates when the budget documents should have been published. Timeliness is an essential feature of BT, because without it citizens cannot participate in the budgeting processes.

Although, as detailed in the above mentioned newsletter, LGUs BT in Croatia has been improving, the situation is still far from satisfactory. Nevertheless, some LGUs did perform remarkably well. Viewed by type of LGU, counties are the most transparent, cities are much less so, and municipalities are mostly non-transparent (only one out of 428 municipalities published all five requested budget documents). Viewed by type of budget document, LGUs are much more inclined to publish enacted budgets than budget proposals; citizens are faced with a fait accompli and are unable to participate in the planning of the next year’s budget. Furthermore, even when local budget documents are published, it is mostly with a considerable delay, while the vast majority of websites are difficult to navigate, slow to respond and of a poor quality, and some municipalities do not have websites at all.

As the analysis shows that the BT score of an LGU is not significantly influenced by its population size or its budget performance, it can be assumed that good BT scores primarily depend on the LGU authorities’ will or on the individual efforts of diligent and responsible LGU public servants acting on their own initiative. Consequently, one could recommend that the Government and Ministry of Finance should tighten the obligation of LGUs to publish key budget documents, including citizens’ guides, within predetermined time limits, and penalize LGUs which do not comply with this obligation. Moreover, they should set a good example by the timely publication of key state budget documents, including citizens’ guides, showing to LGUs the importance of the BT for the efficient and equitable collection and spending of public funds. Citizens’ guides could also help to educate citizens and the media about the structure of the budget and budgetary process as well as the significance of public participation in budgetary processes.