The Open Budget Survey (OBS, as it is known in the GIFT community) is a fact-based, comparative, and independent research tool, at the global level, that assesses access by citizens to central government budget information (transparency), formal opportunities for citizens to participate in the national budget process (public participation), and the role of budget monitoring institutions, such as the legislature and auditors, in the budget process (oversight).

As a result of the 2019 edition, Costa Rica obtained 57/100 in transparency, 9/100 in public participation and 74/100 in oversight. These results showcase important areas of opportunity in terms of fiscal transparency and participation.

Some of the recommendations made by the International Budget Partnership (IBP), the organization behind the OBS, in this evaluation were:

Given the abovementioned recommendations, and with the purpose of implementing a pilot mechanism to involve the citizens in the formulation of the budget and monitoring its implementation through the use of data, the Dirección de General de Presupuesto Nacional (DGPN- Directorate General for National Budget) of the Ministry of Finance in coordination with the Laboratorio Colaborativo de Innovación Pública (Innovaap- Public Innovation Collaborative Laboratory) designed the Open Budget School  as a mechanism to address said areas of potential improvement within the dynamics of the National Budget.

The School has the purpose of forming actors and users on open budget data us, that includes fostering their understanding of the budget cycle, the standard of open fiscal data, and the use of budget data for a more informed and effective impact and citizen empowerment.

What is the Open Budget School?

It´s a learning space that allows citizens in general to deepen their understanding of Costa Rica’s budget cycle, the open fiscal data standard, and the good use of data.

To be part of the School, the Ministry of Finance makes a call through its social media networks, which is replicated by Innovaap to foster an effective reach of broader societal actors. In the 2020 edition these institutions received 267 applications. However, it was previously established that the maximum number of participants was 30, who were selected based on the target audience, among them:

Officials of the national budget management:

At the end of the selection and review process, a diverse group of participants were obtained from civil society, academia and communicators, with the next disaggregation by gender.

The experience of 2020 allowed the School to be visualized as a space that made it possible to share knowledge horizontally, from the perspectives of facilitators and participants.

Participants also developed innovation projects as a result of data usage, through the “BetterBudgetDataquest” initiative promoted by GIFT. As a product of this initiative, the following proposals of high social value emerged:
Mission Desk: Analysis of the investment budget in educational infrastructure. 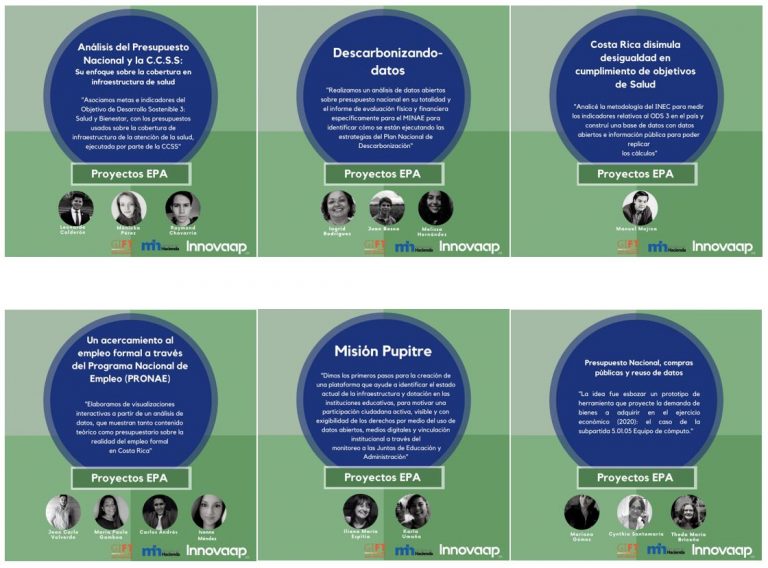 If you want to know more about the development and results of the first edition of the School, you can find it here: http://innovaap.ucr.ac.cr/proyectos/escuela-presupuesto-abierto/

The second week of May is the launching date for the 202 edition of the School, where 35 people from various sectors such as media, social organizations, academia, PYMES and public institutions will be participating.

The new reality generated by the COVID-19 pandemic involves an additional effort for each of the parties involved in the Open Budget School, as well as a whole adaptation process, modifying its means of teaching and sharing knowledge and experiences, making it migrate from face-to-face to virtual mode.

Some of the challenges for this edition are:

The School’s results show that this mechanism has fulfilled the objectives for which it was created, because the participants developed skills to influence the budgetary stages through the use of data. This was specifically generated by the development of #ExploraDatosCR (#BetterBudgetDataquestCR) on relevant issues to the national context, including health, environmental education, employment and public procurement.

It should be noted that the process worked to encourage and promote active participation and proper citizen control of budget from the use of data. This is a vital point of relevance because the involvement of citizens in the learning process allows effective incidence in the formulation of the budget and the monitoring of its implementation.

Finally, this empowerment process makes it easier to bring about commitments from national budget authorities to continuously publish and update open budget data, which is not only beneficial for citizen monitoring and evaluation, but also for improving the integrity of public financial management through proactive fiscal transparency.