Participation is the Next Transparency Frontier for OGP

The Open Government Partnership (OGP) aims to improve the quality of citizens’ lives and their relationship to government. In order to do this, the countries in the Partnership have pledged to work through National Action Plans to improve access to government information, fiscal transparency, citizen participation, and accountability. It is a powerful but ambitious aim: OGP is swimming against a global tide of rising inequality and declining public trust in government.

What’s more, there is no guarantee that improving public information and participation will bring about greater accountability or improved effectiveness and responsiveness on the part of government, let alone decrease poverty. The evidence supporting this notion is promising, but to date not yet conclusive. The Partnership is the bold bet that 66 governments and thousands of civil society organizations (CSOs) have voluntarily posted.

With the third major OGP Summit just weeks away, the moment seems right to take stock of progress toward these goals. Though it is still early days in the Partnership, we can take stock of the progress OGP are countries making in improving transparency and public participation on their way to better and more accountable governments. Here we’ll focus on public budgeting, as a sensitive indicator of the political will of a country to open its operations to public scrutiny.

How are OGP countries faring on budget transparency and participation?

According to the recently released 2015 Open Budget Survey, the average score of 46 OGP countries for public access to budget information is 59/100. This is higher than the average of 34/100 for non-OGP countries included in the Survey. While there is considerable variation across the OGP sample, the average score does show modest improvement, from 57/100 in 2012 to 59/100 in 2015, which brings it close to the score of 61/100, which the Survey deems an adequate level of public access to budget information. 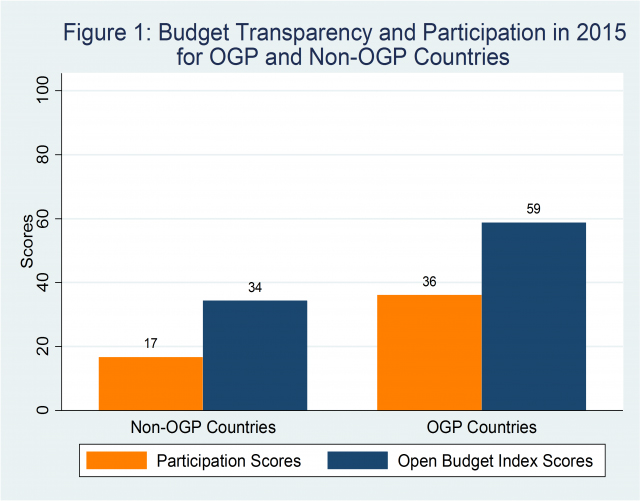 Why should we be concerned with public participation in the budget process?

Given that participation in the budget process is a relatively recent development, there are few established norms and practices for the field to draw on. The first step must be to build an understanding of why this issue is so important to the broader issue of budget accountability.

First, public information and participation are mutually reinforcing. Access to adequate, timely, useful information is essential to informed, effective public participation. At the same time, opportunities for participation create the incentives for the public to request and utilize available information.

Second, in the past twenty-five years, there has been a dramatic increase in awareness of the importance of public participation in policy making and in the priority given to it. More recently, this trend has been reflected in the field of public budgeting. Direct public participation in government fiscal policy and budget making has been established as a civil right in the High Level Principles of Fiscal Transparency, Participation and Accountability promulgated by the Global Institute for Fiscal Transparency (GIFT) and endorsed by the United Nations General Assembly in 2012. [1]

Further, over the past year, two major international institutions have similarly endorsed the importance of public participation in budgeting as a complement to greater transparency. The International Monetary Fund’s Code on Good Practices for Fiscal Transparency,  published in 2015, includes the principle of direct public engagement in fiscal policy, as does the 2014 Principles on Budgetary Governance  adopted by the Organisation for Economic Co-operation and Development.

Third, although public participation in budgeting is relatively new, the evidence attesting to its impact on resource allocation and service delivery is growing. Many of the existing findings are based on the well-known Brazilian experience with participatory budgeting, established first in Porte Alegre in 1989, and now replicated in over 40 countries around the world.[2] Participatory budgeting improves people’s lives in a variety of ways: lower infant mortality in Brazil, wider coverage of basic services in India, and better targeting of social-protection programs in Mexico.[3]

Other research efforts into different types of participatory practices in budgeting have also started to generate evidence that public participation in budgeting can address the challenges of both declining trust in government and rising inequality. For instance, a just-completed review of the evidence finds there are grounds for arguing that direct public participation may help limit misuse of public funds; increase the provision of services that respond to community preferences; produce more informed, engaged citizens; and enhance both individual capabilities and social well-being.[4]

How can OGP countries improve public participation in the budget process?

Some OGP governments have encouraged the direct engagement of citizens during multiple moments of the national fiscal policy cycle. A GIFT comparative case study across several OGP countries – Brazil, Canada, Croatia, Kenya, Mexico, the Philippines, South Africa, and South Korea – suggests that direct public participation can take place at various stages of the budgetary cycle and shows how governments are encouraging public participation.[5] It is simply about the people being heard; some examples follow.

Brazil and Kenya have developed institutions that provide opportunities for citizens and policy experts to contribute to medium-term planning. South Korea, Canada, and Kenya offer excellent examples of ways legislators can engage citizens and policy experts in public processes. The Philippines and Brazil offer innovative institutional mechanisms to permit citizens to select specific projects for inclusion in the budget. Mexico’s Supreme Audit Institution has made significant advances in creating ways for the public to participate. The Philippines and South Africa offer opportunities for citizens to directly monitor service delivery and see that resources are spent as they were meant to be spent. And Croatia has adopted a strong institutional framework that permits public participation in a wide range of budgetary and fiscal processes.

OGP gives governments a chance to have a dialogue with citizens and to use action plans to test new practices. We know that 34% of all OGP commitments made by participating countries are related to fiscal transparency, but just a small number of these address the crucial issue of participation.[6] We also know that considerable institutional innovation is taking place throughout the world and that now is the time to advance public participation in fiscal policies and budget making. OGP countries have a unique opportunity to use National Action Plans as a mechanism to pilot fiscal participation initiatives.

At the upcoming OGP Summit in Mexico at the end of October 2015, the Fiscal Openness Working Group, convened by GIFT, will meet to provide an exciting opportunity for OGP countries and CSOs to learn about good practices in participation, to share experiences with other countries, and to take home new ideas that can push the boundaries of fiscal participation. The overarching goal is recognition of the public’s right to be heard in the use of public resources.

[1] Principle Ten of the High Level Principles on Fiscal Transparency, Participation, and Accountability establishes that Citizens and non-state actors should have the right and effective opportunities to participate directly in public debate and discussion over the design and implementation of fiscal policies.  The UNGA Resolution is available at www.un.org/ga/search/view_doc.asp?symbol=A/RES/67/218

[2] From 13 cases of participatory budgeting in Brazil in 1992, we found more than 350 today. Outside Brazil, more than 300 cases have been documented in more than 40 countries on all continents.