How public institutions and CSOs are changing the game: the GIFT Public Participation in Fiscal Policy and Budget Making Award

GIFT is honored to announce the results of the Public Participation in Fiscal Policy and Budget Making Award. The network ˜s Coordination Team received 16 submissions documenting quite varied and amazing experiences coming from all range of actors in the fiscal transparency and accountability ecosystem, from 13 countries (Brazil, Chile, Georgia, Germany, Guatemala, Kenya, Mexico, Nepal, Nigeria, Paraguay, Papua New Guinea, Philippines, and Portugal). We were very pleased to have received proposals coming from both government and civil society organizations, and that winners came from both types. This reflects the interest in public participation from all actors. Of these 16 cases:

We are very happy to announce that the top considered mechanisms were proposed by a local government in Portugal, the Court of Audit of Georgia, and a CSO in Mexico. Congratulations! 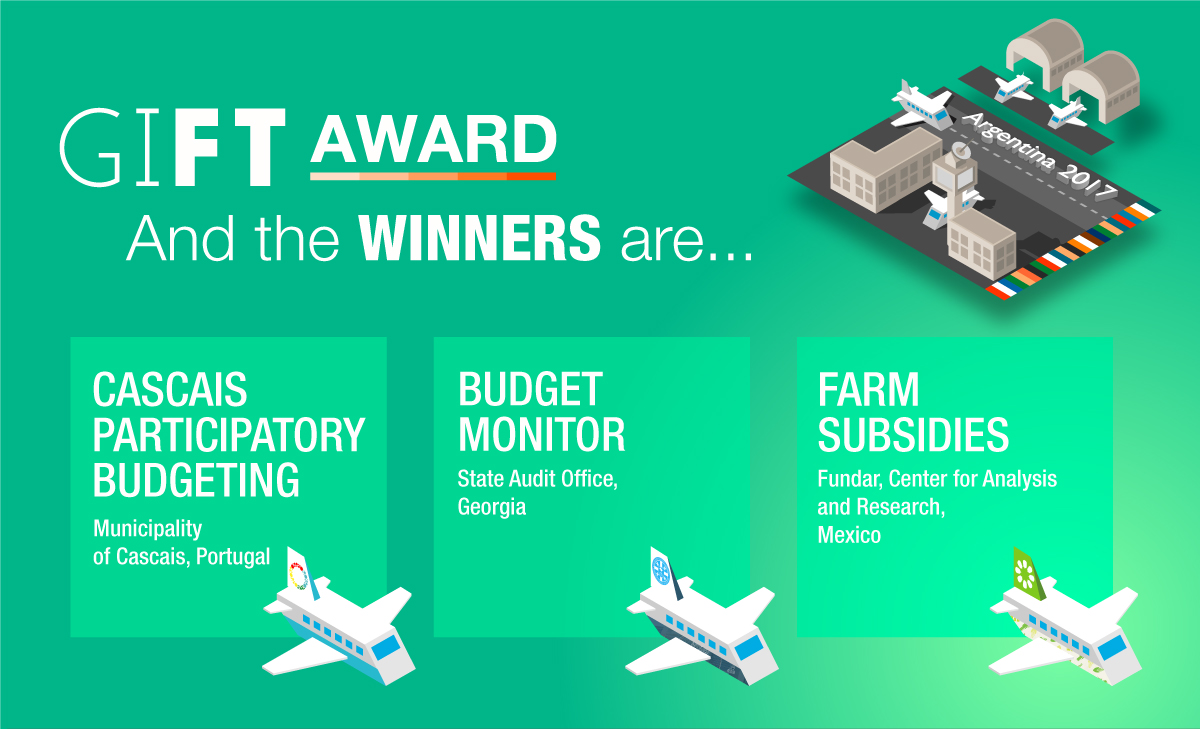 Taking home the top prizes were the Cascais Participatory Budgeting, implemented by the Municipality of Cascais, Portugal; the Farm Subsidies: Public participation to improve the situation of small farmers in Mexico, executed by the CSO Fundar, Center for Analysis and Research; and Georgia‘s Budget Monitor, implemented by the State Audit Office. These cases are invited to attend the Open Government Partnership Regional Meeting in Argentina (Buenos Aires, November 20-22) to present their experience. We will see you there!

The GIFT Selection Committee had a very hard task selecting the best 3 cases. A Special Mention Award from the Jury went to the Citizen Participatory Audit case of the Commission on Audit of the Republic of the Philippines, another case presented by a Supreme Audit Institution, that has already been documented in GIFT’s Guide on Public Participation Principles and Mechanisms (see http://guide.fiscaltransparency.net/case-study/citizen-participatory-audit/) and published as part of a case study produced as the GIFT effort to share with practitioners, success experience on public participation in fiscal policies.

GIFT was so pleased with other cases that we will try to document, in the coming months, many more. We will be in touch with other fantastic proposals, aiming at publishing soon at least 3 additional cases, besides the 3 finalists.

The Municipality of Cascais, with a population of 206.000, has ran the Participatory Budget for 6 years, involving more than 150.000 citizens, implementing 88 projects (works) worth 15.820.000‚¬ and has strengthened people’s confidence in their governors.  Moreover, their methodology has been replicated in more than 10 cities and observed by different continents. Farm Subsidies (Subsidios al Campo) is a public participation case led by a public interest group, a peasant organization, and a group of academics and technical experts that uses Mexico ˜s Freedom of information laws to obtain official data on the recipients of agricultural subsidies, which is analyzed and disseminated widely through a user-friendly website (www.subsidiosalcampo.org.mx).  Through this online public database, Subsidios al Campo improved the transparency of government farm subsidies, and identified a disproportionate, and inequitable, concentration of subsidy recipients in the wealthiest 10 percent of farmers. The analyses helped explain how this happened, and the advocacy supported by this evidence contributed to reforms in the subsidy programs. Georgia´s Budget Monitor is a recent initiative that offers a unique analytical web-platform with comprehensive information about public finances, designed from an auditor’s perspective via different data visualization tools, such as interactive and user-friendly diagrams, info-graphics and tables. Further, to engage the public constructively throughout the audit cycle, through the Budget Monitor platform, citizens can send audit requests, suggestions, and proposals, inform the SAOG about the deficiencies in the PFM system, and suggest the priority spheres for future audit(s). Additionally, the Jury awarded a special mention to the Citizen Participatory Audit of the Commission on Audit of the Republic of the Philippines, a practice that involves citizens as member of the Commission audit teams in conducting audits.