Public Participation in Fiscal Policy: The Next Frontier in Budget Transparency

Direct public participation in the design and implementation of fiscal policies is the next frontier of fiscal openness reforms.

In combination with the full public disclosure of fiscal data, public participation can promote the fairer and more effective use of public resources, result in public officials being properly held to account, and produce improved development outcomes.

The first generation of international fiscal transparency reforms focused on the need for comprehensive information in budgets, forecasts and outturn reports.

Experience has shown that disclosure is a necessary but not a sufficient condition for accountability: budgets and fiscal reports may be published into a vacuum unless there is effective oversight by the legislature, watchful auditors, an active media, and direct participation at all stages by civil society, other non-state actors, and the general public.

This is illustrated in the Transparency, Participation, and Accountability Funnel below. 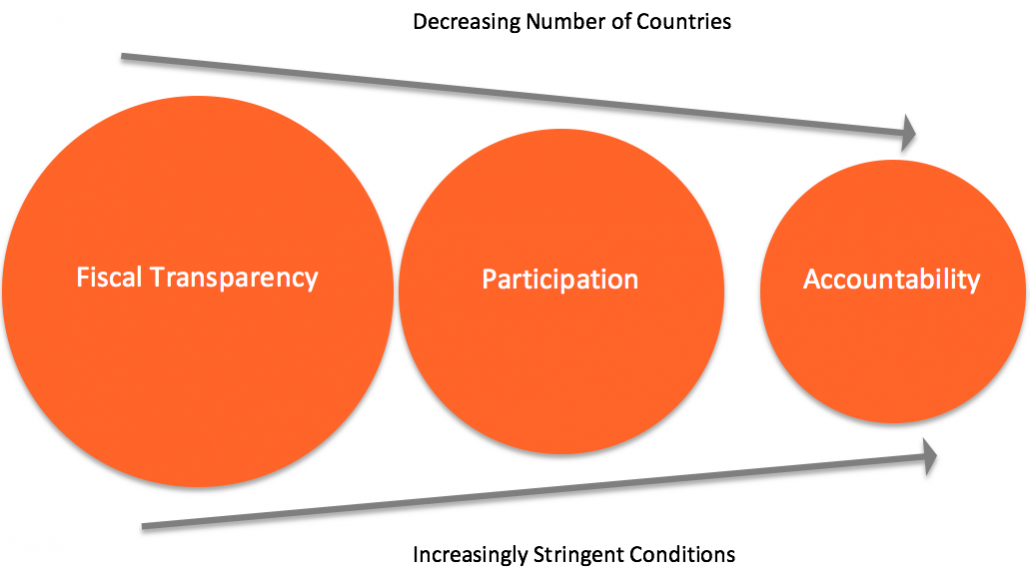 Public participation refers to the variety of ways in which the public – including citizens, civil society organizations, business organizations, academics, and other non-state actors – interact directly with public authorities on policy design and implementation.

Participation may be through face to face communication, deliberation or input to decision-making, or by written forms of communication including the internet. Participation ranges from one-off consultation to on-going and institutionalized relationships, such as regular public surveys, administrative review mechanisms, standing advisory bodies, or representation on governing bodies.

Public participation may be broad-based and engage the general public, for instance over the quality of public services or the level of social transfer programs. Or it may be more expert-based, such as on whether fiscal policy is sustainable or on the detailed design of tax policies. As defined here, public participation does not include autonomous and independent social action such as private lobbying of public officials, or public protests.

There are four main domains in which direct public participation should be sought in the design and implementation of fiscal policy:

Prompted in part by the global financial crisis, as well as chronic weaknesses in taxation, spending and public service delivery, the Global Initiative for Fiscal Transparency (GIFT) was launched in 2012 to provide fresh impetus to efforts to address transparency and accountability failures.

One of GIFT’s ten High Level Principles of Fiscal Transparency “ which were endorsed by the UN General Assembly in December 2012 “ asserts that citizens have a right to participate directly in the design and implementation of fiscal policies. This was the first time that such a right to public participation in fiscal policy had been asserted in an international normative instrument.

Public participation as a game-changer

Examples of public participation range from:

The potential of public participation has of course been hugely boosted by the ICT revolution that has dramatically lowered the cost of direct interaction between citizens and governments while also creating entirely new spaces for citizen input and deliberation. Governments and non-state actors are increasingly working together to address social, environmental and economic challenges and opportunities. Civil society is increasingly recognized as an important agent of good governance and sustainable development, alongside the state and the market.

Recognition of the importance of public participation has recently been incorporated in major fiscal openness standards and norms, including:

However, a GIFT stock-take of international norms and standards on fiscal transparency in 2012 identified a major gap with respect to detailed guidance on what public participation in fiscal policy should actually mean in practice. GIFT’s Lead Stewards therefore initiated a work program that has to date involved:

The overall objective of this initiative is to promote an increase in the extent to which governments, legislatures and audit institutions provide effective opportunities for public participation.

In addition to developing new ‘standards’  and instruments to measure public participation in fiscal policy, a key area of focus for GIFT is the Open Government Partnership. GIFT and the OGP have established the Fiscal Openness Working Group to provide a venue for ministries of finance, CSOs and others to deliberate, share experiences, and expand fiscal transparency and public participation in fiscal policy in individual countries and regions.

An updated version of the draft Public Participation Principles was posted on the GIFT web site on 24 August for a further round of public consultation. To comment on the draft principles, click here.

Following further workshops it is currently anticipated that a revised version of the Principles will be completed by the end of 2015.

To join GIFT’s Community of Practice “ giving you entrÃ©e to an on-line discussion on budget transparency and fiscal openness amongst practitioners and experts – click here.